“Leave the Dock and Good Things Happen.” Tony often says this – which applies to boats on every level – but also to life in general.  Sometimes you just have to let loose the docklines and… go!

We started a life of adventure for real when Tony and I were married in September, 2000.  Our ten-year old daughter was several years into private school education which was wonderful for her, and our family. Though we wanted more for her, and for us. As a result of Tony’s work – tactician and driver for multiple America’s Cup teams – we took Sydney out of school for her 4th and 6/7th grade school years to live in New Zealand and also traveled to Australia and Bermuda with Tony’s VOLVO OCEAN RACE team.  We lived her 11th grade school year (2006-2007) in Valencia, Spain (AC32) which we still call our second “home” today. We also traveled to the UK, Italy, France, Denmark and Sweden.

While we continued to travel annually when we could (ie: Sardinia, Corsica, Tuscany, Cayman, Paris, Barcelona, S. France…) with Sophia (now 11) and Oliver (now 9) we decided it was time to step it up.  In September 2014, we pulled out — with a short tether — of mainstream education and traveled/studied in Ibiza/Valencia/Barcelona, Spain, then to Avignon, France and Torbole, Italy on Lake Garda. We then moved onboard our 1973, 40′ Huckins, CORTADO in Jacksonville, FL and spent the remainder of the winter cruising the ICW on the east coast of Florida. We cruised down to Miami and the Keys, then returned to Newport RI for the months of April and May.

We love the travel and to share a life of experiential learning with our children has been more than fulfilling for the entire family.

So we have decided to continue this path for now… because we love it.

In this digital format, Tony and I will chronicle the best we can our family adventures – exploring and learning as we go.   Please subscribe to receive updates on our journey, and send us notes  –  we love feedback! 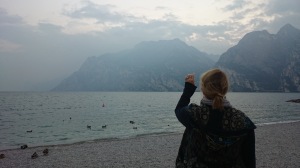