We are often asked how we study science while traveling.  Initially, it was not easy!  I was trying to fit our science program into a traditional schoolroom “box”,  one in which we decidedly did not conform. Once I started quantifying our experiences, I realized the breadth and depth of what we are actually learning.

While the kids’ each have individual curriculums for the year (Earth/Life Science for Oliver and Physics for Sophia), we often encounter after-school ways to compound their learning. We test scientific theories and ourselves by playing in nature, asking challenging questions and seeking out the answers. In our view, curiosity is the most important factor of scientific learning and discovery.  It is our goal to have fun with science and of course, learn as we go.

Science is hard to ignore when you are drifting (literally) in boat-life academics.  Weather, sky, wind, propulsion, balance, nature, physics, biology, astronomy are constantly presenting themselves to be examined. The last few weeks have been exceptional in terms of the extended learning we have been able to seek out for ourselves, so it serves as a good example of travel-science at its best.  Our school-days are fairly normal, but after school is an exciting chance to take our learning to another level. And living on a boat naturally means science prevails. 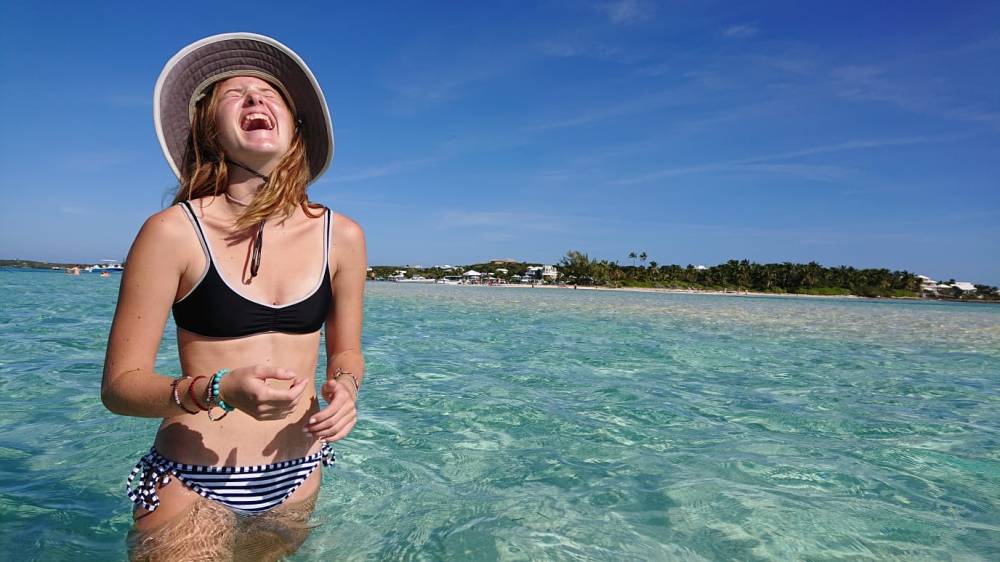 The study of science, by its most broad definition, is a way of exploring and understanding our physical world.  Following are some examples of how science found us when we were out messing around in boats, in the water and on land. 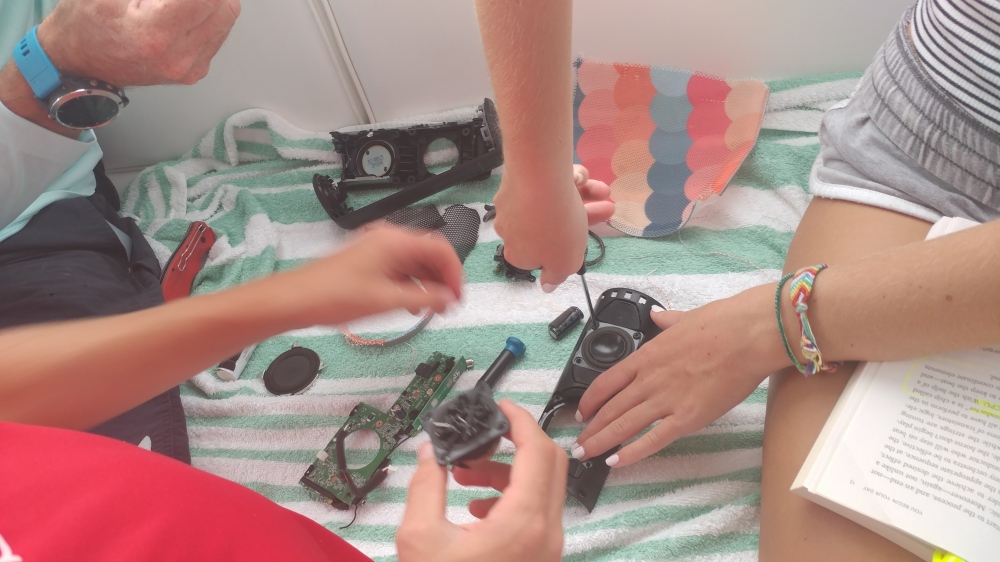 This week we dissected a broken UE BOOM bluetooth speaker to see how it works. Amazed at the intricacies of the speakers tiny parts, we could see the laws of Faraday and Maxwell in action and could visualize how the parts work together to produce high definition sound. 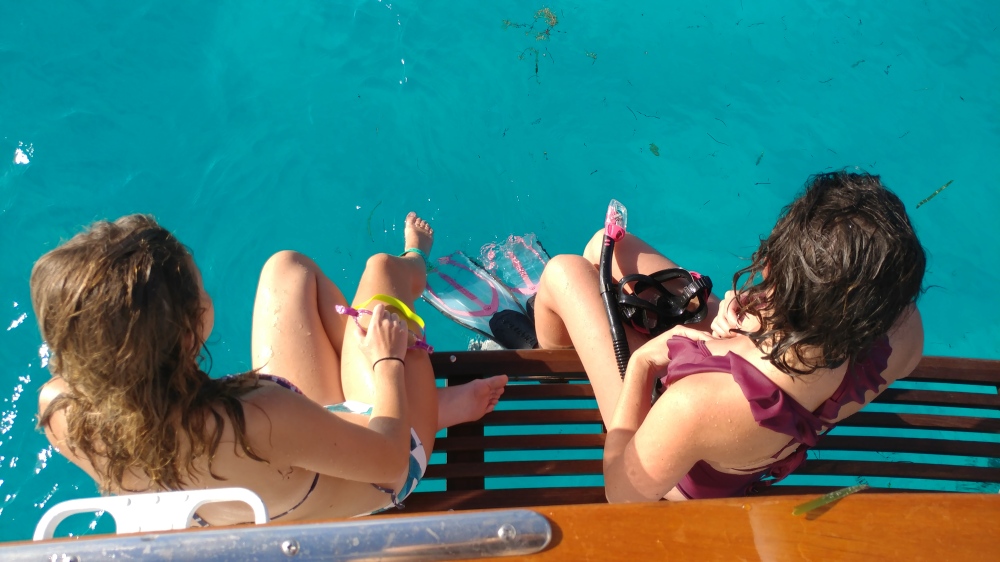 Snorkeling in the Atlantic and the Sea of Abaco allowed us to see all colors of reef-fish, coral, conch, Eagle Rays, Barracuda and even some lazy sharks.

On land we learned about Black Poisonwood Trees in the Bahamas, where they thrive (everywhere), symptoms upon contact (highly irritating rash) and how to avoid them (no touching!).  Optics spoiler: Oliver is NOT REALLY touching this tree…

We invited a boat neighbor/retired Canadian physics teacher over to discuss theoretical physics with us. We took detailed notes, especially when he shared some original ideas regarding boat-based experiments.

We move around during the day (and the kids continue to help drive and navigate), but at night we have been watching with great interest documentaries on the life and theories of Albert Einstein, Marie Curie, Michael Faraday, Sir Isaac Newton, Antoine-Laurent Lavoisier and others. Have you seen the National Geographic “Genius” series on Einstein? It’s powerful, brilliant and beautifully produced.

Bargain! A set of DVDs on NASA space explorers found us in a small free library on the private, lovely Scotland Cay.

We love to study the night sky so of course we stayed up late to watch the recent “Super-Blood-Wolf-Moon” Lunar eclipse, which occurred directly over our Bahama-heads… so impossibly close it seemed you could reach out and touch it.  It was thrilling to see science at work from predictions of day, time, place, color, duration – all incredibly accurate and also beautiful beyond our imaginations. 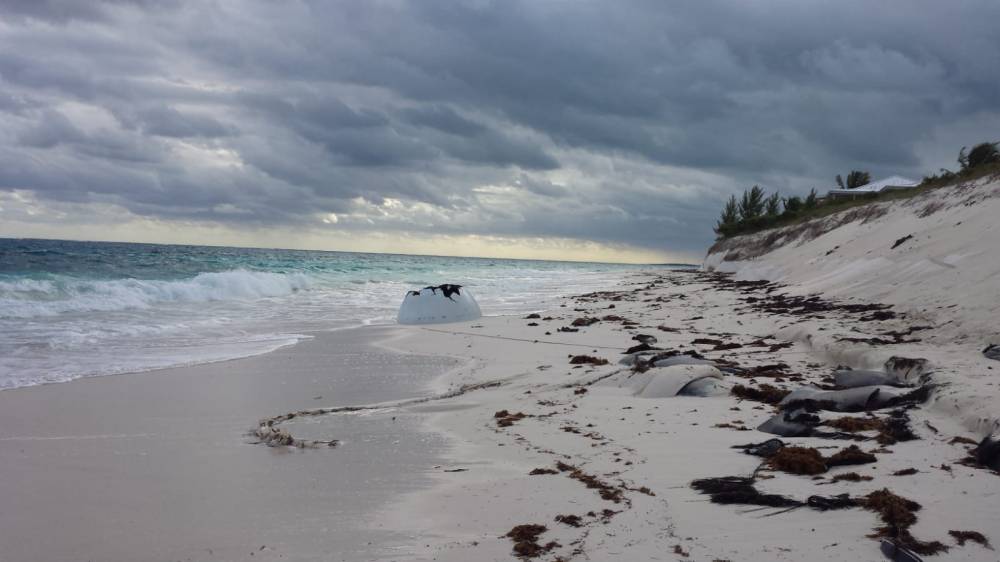 Fellow NASA-lovers! With great luck, we happened upon three separate Abaco islands which had SpaceX  rocket parts washed-up on their shores. The nose cone-piece above, we think, is from the most recent SpaceX launch in early December as it was most in-tact and had freshly landed.

“Look up at the stars and not down at your feet. Try to make sense of what you see, and wonder about what makes the universe exist. Be curious.” –  Stephen Hawking 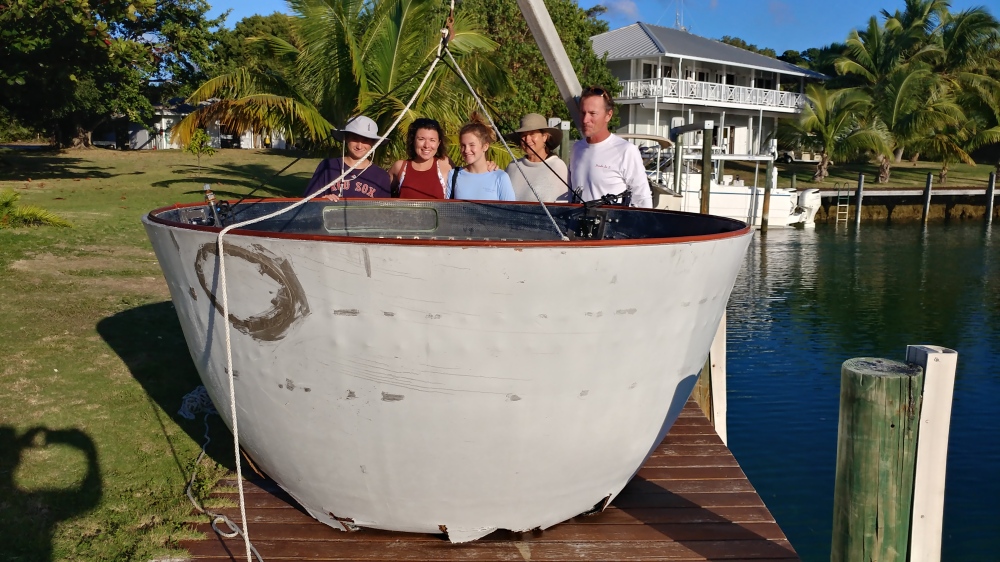 “I have no special talent. I am only passionately curious.”  – Albert Einstein

Fun with weather, wind and current:  Watching a giant winter storm descend on the east coast of the US, we followed its path on radar and weather reports to best prepare for the incoming rain and cool air in the Bahamas.  The wind direction and velocity also determined where we could or could not anchor, and when it was time to return to a dock and the safety of multiple well-tied lines.

Newtonian mechanics: Tony and the kids raced in a local regatta onboard the Bahamian sloop called, the Abaco Rage. This unique boat is designed without a keel, so the sailing stability comes in the form of human ballast.  This classic smackboat has a low-slung hull, tall mast, low boom and a HUGE sail. Most of the crew (of about 20 people) sit on one of three separate planks which extend the sides called, “prys” and they move from side to side as the boat turns to give balance to its awkward design. Racing was altogether thrilling, scary, exciting and physically uncomfortable! Navigating the mechanics and safety alone made it an experience I don’t think the kids will ever forget.

Timbalero, anchored near Lynyard Cay in the Abacos, patiently awaiting our return after of day of island-discovery.

So much learning to do and so little time. Finding after-school ways to explore, brings a bounty of learning we could not otherwise plan for. If we are curious, opportunities to learn are everywhere and will find us at every turn.

Some science books we are using this year:

Other Labs:  When travel-schooling on land, we use mail-order labs from companies like Kiwi-Co (physics and engineering) and Mel Science (chemistry). Both are excellent sources for home-based, hands on learning and imperative if we want to have fun with science indoors.