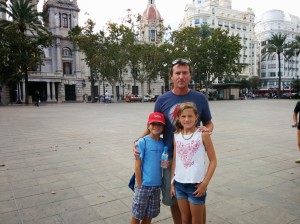 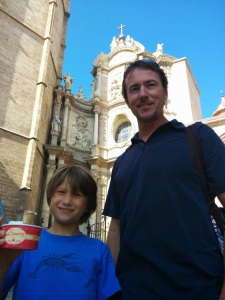 We awoke early to take a short flight from Ibiza to Valencia, our old home. Valencia is a place we already love and know so well. It was a week of exploring the city with the kids and re-connecting them with our old neighborhood, playgrounds, and also spending time with many friends. Our evening meals were, each and every one, spent with our Valencian family, which was a vital part of the planning. 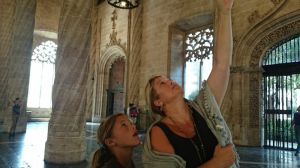 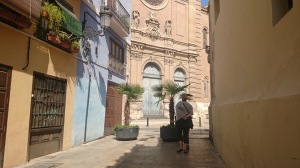 Exploring the old city of Valencia was filled with memories of living there when the kids were little. After school, we spent our days in the old city, in parts like the Plaza de Ayuntamento and Mercado Colon. 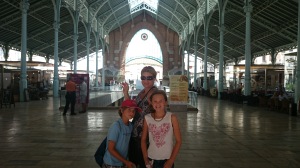 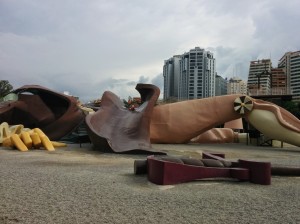 Above, the kids are having fun on one of the gigantic slides at Gulliver Park. We learned later that Gulliver is made of polystyrene and was a test model for the material now currently used in building fallas sculptures. 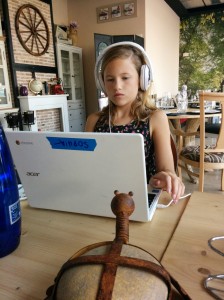 School in Valencia often looked like this: in a quiet restaurant with WIFI, jamon y queso sandwiches and alongside dad, also working! Lessons this week in Valencia are heavy on math (including a week’s lesson in money), history, art history and poetry. On the computers, the kids are studying spanish via DUOLINGO and DanceMat Typing. 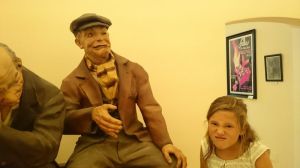 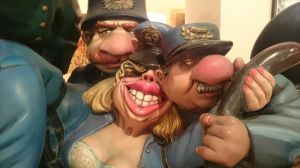 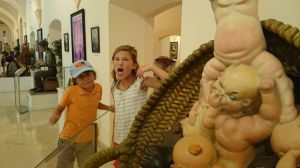 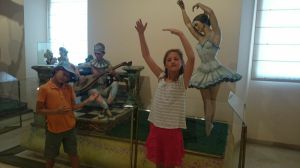 We went to the Fallas Museum and after that, the l’Oceanographic... two epic locations in one great day of exploration!   Fallas is a region-wide festival held over 19 days every March. The first recorded Fallas celebration was around 1900.  The Fallas Museum was spectacular. Each year they save one Falla sculpture from being burned on the last night, and put in this museum. 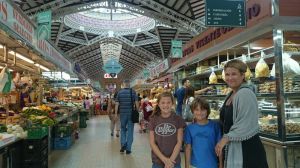 We love Mercado Central and shopped there for our lunch, which we took on the steps of the old market. We also toured la Lonja de la Seda, (the silk exchange) a 15th century business center/market place. It is currently a museum, though still also used for government meetings, water tribunals, etc. for the city. A wonderful day. In the evening we went to Benat, an area just outside of the city for delicious paella with friends. A very special evening, in particular because we have spent time in the last few years with these particular friends, but never in Valencia! The kids swam, played table tennis and learned a new card game called burro (donkey) with their spanish primos. The kids are loving every minute. Sophia is a bit of a fashion queen here – the Mediterranean life seems to suit her nicely. … both have mastered the double-kiss hello! 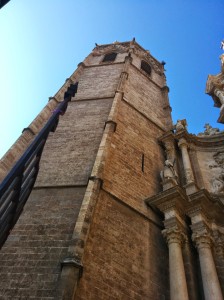 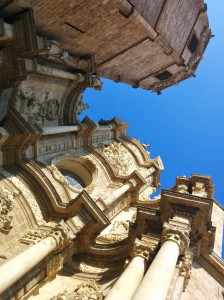 If you are visiting the city, don’t miss the Cathedral de Valencia y el Torre de Miguelet. Above are photos of the  Cathedral and the Tower. Inside,  is believed to be the real “Holy  Grail” once protected by the Knights of the Holy Grail and secretly held for safe keeping in Montserrat and later, Valencia.  Who would look there? 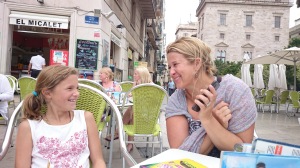 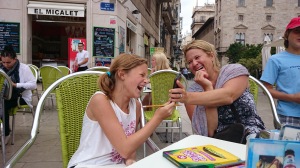 Above, enjoying time together in the plaça de la virgin in the city center, as well as Tony and my 14th aniversario de la boda! In the evening, Tony and I celebrated our anniversary at one of our favorite restaurants, Lambrusceria. We had a lovely evening and the cuisine was as delicious as we remembered. The kids spent their evening with Eva, Guillermo y Laura. They love their spanish Aunt Eva!